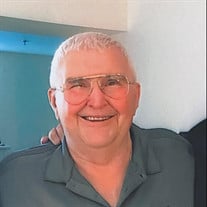 William Emerson Scivally III, 77, of Kankakee, passed away Sunday, September 20, 2020. William was born October 8, 1942 in Anna, Illinois the son of William E. Scivally II and Imogene (Sadler) Ward. He was raised in Bradley by his loving mother and step-father, Vernon Ward. Bill graduated from BBCHS where he met his high school sweet heart, Donna Bisaillon. They married on November 5, 1960 at Maternity BVM Catholic Church. After 52 years of happiness, Donna passed. They raised four children who survive, Trina Fager of Bonita Springs, Florida and he husband Steve, Troy Scivally of Council Bluff, Iowa and his wife Lisa, Chris Scivally of Bourbonnais and her husband David Sargent, and Rob Scivally of Kankakee and his wife Natalee. In addition, survived are 18 grandchildren, 21 great grandchildren, and 1 great grandson. Also surviving are two sisters, Dorothy Burton of Kankakee and her husband Ken and Carolyn Norton of Bradley. Three sisters-in-law, Patricia Ward of Ashkum, Tina Brown of Mesa, Arizona and her husband Mike, Kathy Smith of Bourbonnais and her husband Carl. Two brothers-in-law Emil Bisaillon of Bourbonnais and his wife Mikal Anne and David Bisaillon of Bourbonnais and his wife Debbie. Preceding in death are his parents and his in-laws, Robert and Dorothy Bisaillon; a brother, David Ward; a brother-in-law, Joe (Tina) Bisaillon; a granddaughter, Malissa Scivally; a great granddaughter, Mattea Joy Freedlund. William was a proud U.S. Navy Veteran. William enjoyed playing euchre with friends and family, and was an avid sports fan, especially when it involved cheering on his grandchildren at all their prospective sports. William made friends wherever her went; earning the nickname “Mayor”. He was loved by many who will miss his wit and humor. A Celebration of Life will be held at a later date. Memorials may be made to Mattea’s Joy, online at https://www.matteasjoy.org/ .

William Emerson Scivally III, 77, of Kankakee, passed away Sunday, September 20, 2020. William was born October 8, 1942 in Anna, Illinois the son of William E. Scivally II and Imogene (Sadler) Ward. He was raised in Bradley by his loving... View Obituary & Service Information

The family of William E. Scivally III created this Life Tributes page to make it easy to share your memories.

Send flowers to the Scivally family.