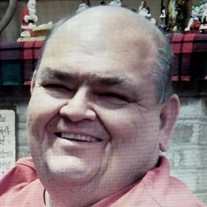 William M. Shidler, 62, of Bourbonnais, died Tuesday (February 12, 2019) at Amita St. Mary’s Hospital in Illinois. Visitation will be from 11am – 1pm Saturday, February 16, 2019 at River Valley Christian Fellowship in Bourbonnais with a Memorial Service to follow at 1pm. Pastor Derick Miller will officiate. Cremation rites were accorded. Memorials may be made to Fortitude Community Outreach or River Valley Christian Fellowship (RVCF) Building Fund. He was born September 14, 1956 in Chicago Heights, IL, the son of Elmer Joseph and Joyce Mae Williams Shidler. He graduated from Highland High School, IN, in 1974. He also completed some college hours. He married, Patricia A. Osenga on February 5, 2000 in Kankakee, IL at the Westbrook Church of the Nazarene. Mr. Shidler retired from the State of Illinois. He had many odd jobs as a youth, from golf caddy to snow plow driver. He grew up in the Nazarene Church, but was currently a member of River Valley Christian Fellowship in Bourbonnais, where along with his wife; he served as a Small Group Leader. He was a great fisherman in his healthier years and his friends are hoping he is ‘not emptying the pond before they get there’. He enjoyed cooking; especially trying different types of rubs. He was a bird watcher and also enjoyed feeding them, he did both vegetable and flower gardening. He loved listening to Gospel music and attending Gospel Concerts. Bill loved spending time with his family, especially his 3 grandsons. He had a big heart and was always kind. He was always caring about other people. He claimed to be an introvert, but once he got to know you, you were friends for life. Bill delighted in studying God’s word daily, especially the Old Testament. He felt particularly drawn to the children of Israel. God would time and time again prove His love for them as they would repeatedly show their distrust in Him. He stated how that paralleled his own life so many times. How amazed he was that God would always welcome him back with love and forgiveness after failing Him time and time again. He loved talking about what Jesus had done for him. Even on his final day here he was still telling his story. Surviving are his wife, Patti of Bourbonnais; his son, Ben Shidler, of Raleigh, North Carolina; two daughters and one son- in-law; Beth Elekani, of Plymouth, IN; Brittany and Kevin Cantrell of St. Anne, IL; two sisters and one brother-in-law, Paula and David Collins of Highland, IN; Judy Oliver of Griffith, IN; three grandsons; Joel Elekani of Plymouth, IN; Tristan Shidler of Dunham, NC; Kyle Elekani of Plymouth, IN; one nephew and niece-in-law; Michael and Migali Sipos of Griffith, IN; one niece; Melissa Sipos of Griffith, IN. Bill is preceded in death by his mother, Joyce; and brother-in-law; Ricky Oliver.

The family of William "Bill" M. Shidler created this Life Tributes page to make it easy to share your memories.

Send flowers to the Shidler family.