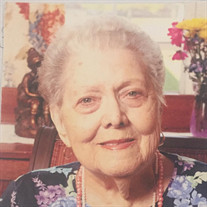 Vonda Lou Belluso, 86, of Bourbonnais passed away on August 16, 2017 at Presence St. Mary’s Hospital. A memorial service will be held Friday, September 1st, 2017 at the Kingdom Hall of Jehovah’s Witnesses, 170 John Casey Rd., Bourbonnais at 3:00 pm. Cremation rites were accorded. Jensen Memorial Chapel is handling the arrangements She was born December 2, 1930 to William & Laura (Sifford) Davis (both deceased) in Oregon Mo. She was married three times, most recently to Victor Belluso of Kankakee, IL (deceased), James Clark of Pittsburgh, IL (deceased) and Connie Odell Lamb of Mayfield KY (deceased), to whom she bore eight children. Thomas Eldridge (Shirley) Lamb (both deceased), Ronnie Dale ( Margaret) Lamb, Donald James ( Joanne) Lamb, John David Lamb, (deceased) Robert Lewis ( Colleen Laurel) Lamb, Carl Dee (Margaret) Lamb, Barbara Diane ( Leon ) LaReaux and Nancy Anne (Larry Tate). She was blessed with 23 Grandchildren and 23 Great Grand Children. She was one of Jehovah’s Witnesses and most recently attended the Kingdom Hall in Bourbonnais, IL. In lieu of flowers, donations may be made to the World-Wide Witnessing Work of Jehovah’s Witnesses at www.JW.org When she had her own home, she enjoyed gardening and cooking. In her later years she enjoyed good food, family and talking to visiting friends and fellow residents at Heritage Woods of Manteno, and most recently Our Lady of Victory Nursing Home in Bourbonnais to whom we are deeply grateful for their most kind care in her last days. Please sign Vonda”s guest book at jensenmemorialchapel.com

The family of Vonda Belluso created this Life Tributes page to make it easy to share your memories.

Send flowers to the Belluso family.