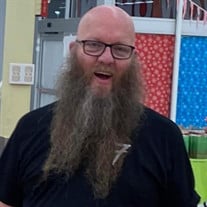 Todd Charles Pearson, 50, of Bradley, passed away Friday, February 11, 2022 at St. Mary’s Hospital. He was born September 2, 1971 in West Plains, Missouri. He was a locomotive engineer and worked for Amtrak. On March 17, 2013 he married Ann Coughenour at home in Kankakee County. He was a proud veteran of the Navy Seabee's and he enjoyed jeeping, and railroading. He loved comics such as Marvel and DC, Star Wars, and Norse Mythology. Most of all Todd loved spending time with his family and being a papaw. Todd is survived by his loving wife, Ann Pearson of Bradley; daughters, Nicole (Jeff Striggow) Zacharias of TN, Kaitlyn Pearson and Alyssa Pearson both of Quad Cities, and Alyson (Alex Goertzen) Zacharias of Naperville; a grandson, Oliver Striggow; his mother, Victoria Pearson; biological father, John (Joan) Davis; siblings, Dwane (Ellen) Davis of Kansas City, MO, Shelia Davis- Jester of Sedalia, MO, and Christopher (Jen) Davis of MO. He is preceded in death by his father, Eugene Pearson; grandparents, Robert and JoAnn Scott; great grandparents, Charles and Neecie Monroe, and Irene Raymond. Celebrations of Life will be held at the Kankakee Train Depot on Saturday, March 19, 2022 from 1-4pm and on Sunday, March 27, 2022 from 1-4pm. Memorials may be made to the wishes of the family.

The family of Todd C. Pearson created this Life Tributes page to make it easy to share your memories.

Send flowers to the Pearson family.