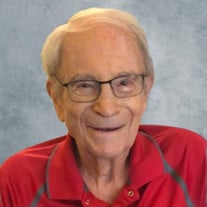 Thomas P. Zamzow “Tiger Tom” died peacefully in Kankakee, IL surrounded by his loving family on Saturday, April 9, 2022, at the age of 91. He was born in Madison, Wisconsin on January 7, 1931, the son of William H. and Kathryn R. (Porter) Zamzow. He married Bretta Rhinehart in September of 1980, in Arlington Heights, IL. Surviving are his wife of 41 years, Bretta; brother, William Zamzow of Glenview; sister-in-law, Donna Welsh of The Villages, FL; three daughters, Meg (Derek) Wenzelman of Bonfield; Anne (George) Rassas of Chicago; Gwen (Tom) Hockney of Chicago; three grandchildren, Seth (Brittany) Wenzelman of Chicago; Nathan (Julia) Wenzelman of Buffalo Grove; Emilie (fiancée Brandon) Wenzelman of Bonfield; one great granddaughter on the way; former spouse, Judith Splitt of Mt. Prospect; and many wonderful nieces and nephews. He was preceded in death by his parents; his brother and sister-in-law, Robert and Patricia Zamzow; sister-in-law Ruth Zamzow; and brother-in-law, Edward Rhinehart. He attended East High School in Madison and was active in scouting, advancing to the rank of Life Scout. He played football and softball and his softball team placed 2nd in the Madison, WI City Fastpitch Softball Championship Playoffs. Tom attended the University of Wisconsin and graduated in 1953 with a degree in Business Administration. While attending, He was involved in the Insurance Society and was president of Phi Kappa fraternity. Tom boxed on the University of Wisconsin Boxing Team for 3 years and was part of the 1952 NCAA Championship Team, where he ranked third in the nation for lightweight boxers. In 1951 he was awarded the coveted “Fightin’est Fighter Award”. For his collegiate boxing accomplishments, Tom was awarded a varsity letter and membership into the “W Club”. Tom served in the United States Army as First Lieutenant and was stationed in Fort Gordon, Fort Bliss, and West Germany. He served as Military Police and a firearms and judo instructor. In 2014, Tom participated in the Badger Honor Flight for WWII and Korean War Veterans. Tom mainly resided in the northwest suburbs of Chicago and was a member of St. James Parish in Arlington, Heights. Much of his career was focused on group insurance where he was the Managing Vice President of Sales at Fred S. James Insurance Company. He was a 50-year member of the Union League Club of Chicago. He enjoyed volunteering with Catholic Charities and was an active member of the Green Lake Rotary Club. He was an avid golfer and enjoyed the arts, attending many concerts, plays, and Broadway musicals. Tom enjoyed his retirement years with his wife, Bretta, gardening, traveling, boating, golfing, and dancing while living in Wisconsin and Florida before relocating back to Illinois. With Tom’s outgoing personality and amazing smile, he made many lifelong friendships wherever he went. While Tom fought as a lightweight in Wisconsin in the early 1950’s, in life he was a real heavyweight. Visitation will be from 3:30 Thursday, April 21st until the memorial service starting at 6:00 at Glueckert Funeral Home in Arlington Heights. Memorials may be made to the Parkinson’s Foundation or to the wishes of the family. Burial will be a private ceremony. Funeral information and condolences can be given at www.GlueckertFuneralHome.com or (847) 253-0168

The family of Thomas P. Zamzow created this Life Tributes page to make it easy to share your memories.

Send flowers to the Zamzow family.