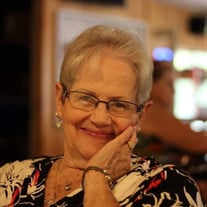 Thelma Mae Alcorn, 83, of Watseka, passed away on Friday, November 20, 2020, at Presence St. Mary’s Hospital in Kankakee, IL. She was born on March, 8, 1937, in Otto Township, IL, daughter of Bascom Jackson Sr. and Leona Lake Jackson. She married Melvin H. Alcorn at the Milford Christian Church in Milford, IL on July 01, 1984. Thelma was a member of the Watseka American Legion Women’s Auxiliary and an avid reader. She enjoyed hosting parties for her family and friends, she was an excellent cook. Thelma was one of 13 Jackson children. She was extremely family oriented and spent most of her spare time on the phone keeping in touch with her family and friends. Thelma was a very hard worker her entire life, a trait she passed along to her children. She was very proud of her children and shared in the happiness of their accomplishments. Thelma will always be remembered for her generosity and her beautiful smile. She is survived by her son, Durwood and Debbie Larsen of Bourbonnais, IL; her daughters, Marla Miller, Laura and Rosetta Larsen all from Crescent City, IL; her brother, Charles and Gwen Jackson of Michigan; her sisters, Lillian Hansen of St. Anne, IL, Phyllis and Austin Knecht of Tennessee; her grandchildren, Jonathan Larsen, Aliah Larsen, Jaydin and Brent Richardson, Angelina Larsen; 5 great-grandchildren; extended family, Sheri Jackson of Toluca, IL, Lola and Merle Arnold of Watseka, IL, Carol DeLahr of Watseka, IL, Judy and Jim Crouch of Milford, IL, Jenny Alcorn of Bourbonnais, IL, Becky and Ron Baker of Arizona, Libby and Clarence Hawthorne of Goodwine, IL, Don and Pat Alcorn of Tulsa, OK, Darold Miller of Watseka, and numerous nieces and nephews. Thelma is proceeded in death by her parents; her sisters, Lucille Richmond, Ethel Venema, Louise Hamande, Ruth Lefeave, Glady Zbinden, and Shirley Wooldridge; and her brothers, Bascom (Sonny) Jackson, Jr., Donald Jackson, and James Jackson. A Celebration of Life will be held at a later date.

The family of Thelma Mae Alcorn created this Life Tributes page to make it easy to share your memories.

Thelma Mae Alcorn, 83, of Watseka, passed away on Friday, November...

Send flowers to the Alcorn family.