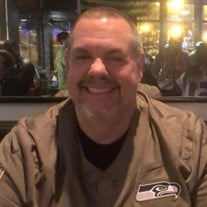 Steven Lee Dickmeyer, 51, of Bourbonnais passed away on Tuesday, November 9, 2021 at Riverside Medical Center in Kankakee surrounded by his family. He was born on July 24th, 1970 the son of Norbert and Virginia (Salvadalena) Dickmeyer in Monroe Washington. Steve was a proud member of the US military serving in the Army as a combat engineer for 5 1/2 years. Steve was a jack of all trades. He loved serving his community, in his younger years he hung out at the fire department in WA, and was part of the Washington state patrol explorer program. Later in life Steve served his community as a member of the Manteno Auxiliary Police Department. Steve loved his job as a truck driver, spending time with his daughter, family and friends as well as traveling, going on new adventures, taking his daughters to six flags, water parks, buliding legos, playing video games, cooking, baking, trying new restaurants, and loved german beer and food . When Steve visited Washington his favorite restaurant was Jeno's. He was a diehard Sea Hawks fan, a jokester, and enjoyed being the center of attention, and was always late for every occasion. He is survived by 3 daughters, Danica Dickmeyer, Kaylee and Madisen Fahnestock, a brother; Roy ( Denise) Dickmeyer of Monroe, WA., a sister; Lisa (Doug) Sackman of Monroe WA. many cousins, a nephew Michael (Tashina) Dickmeyer and their 3 children, 2 nieces; Jill (Jake) Hanson and their 2 children, Stephanie (Chris) Connelly and their 3 children, all of Washington, and a nephew Bentley Ballard. He is proceeded in death by his parents. A celebration of life will take place at Jensen Funeral Home in Kankakee on Thursday, November 18th, 2021 from 3pm until military honors at 6pm. Memorials may be made to his daughter, Danica Dickmeyer, to the Danica Dickmeyer Benefit fund at People's bank. Cremation Rites have been accorded.

Steven Lee Dickmeyer, 51, of Bourbonnais passed away on Tuesday, November 9, 2021 at Riverside Medical Center in Kankakee surrounded by his family. He was born on July 24th, 1970 the son of Norbert and Virginia (Salvadalena) Dickmeyer in Monroe... View Obituary & Service Information

The family of Steven Lee Dickmeyer created this Life Tributes page to make it easy to share your memories.

Steven Lee Dickmeyer, 51, of Bourbonnais passed away on Tuesday,...

Send flowers to the Dickmeyer family.