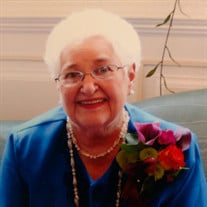 Shirley J. Hosek, 86, of Rantoul, formerly of Manteno, passed away Thursday, November 18, 2021, at Carle Hospital in Champaign. She was born on February 13, 1935 in Kankakee, the daughter of Frank H. and Beatrice (nee Hubert) Morgan. Shirley married John D. Hosek on December 29, 1956 in Kankakee. Surviving are two sons and daughters-in-law, Frank (Kathy) Hosek, of Bourbonnais, Joe (Chris) Hosek of Bourbonnais; and one daughter, Jean Pennington of Indianapolis, IN; 6 grandchildren, Kellie, Bill, Katrina, Isabelle, Elizabeth & John; 2 great-grandchildren; and 2 nephews, Paul and Tony Morgan. Preceding her in death were her husband, parents and brother, Jerry Morgan. Shirley had previously worked for the State of Illinois and retired from there in 1997. She had an infectious laugh that drew people to her, making friends easily and listening to them effortlessly. Most of all, she loved merriment and having fun. Shirley greatly relished games of Scrabble, whether it was spelling out cat or arguing about the spelling of catechism. Picking up a 7-10 split at the bowling alley was a great thrill. She also loved dancing the night away at the Moose, often wearing out several partners. A special night out was lobster tail for dinner followed by a round or two of Manhattans. On more than one occasion, the lights, bells & whistles of the slot machines called her name. Shirley was a life-long Chicago Cubs fan, having grown up listening to the games over the radio with her father and brother. She lived with their highs and many lows and was thrilled when they won the World Series. She took great pride in her family and loved sharing the holidays with them, especially her favorite one, Christmas. So, the next time you’re the last one on the dance floor; trying to figure out how to use the letter Q on the Scrabble board or listening to the Cubs lose, grab a Manhattan, and raise a toast to grand lady and a life well enjoyed. Visitation will be held at Jensen Funeral Home in Kankakee on Saturday, November 27, 2021 from 10:00 AM until the service at Noon officiated by Deacon, Jim Kelly. Burial will take place at a later date.

Shirley J. Hosek, 86, of Rantoul, formerly of Manteno, passed away Thursday, November 18, 2021, at Carle Hospital in Champaign. She was born on February 13, 1935 in Kankakee, the daughter of Frank H. and Beatrice (nee Hubert) Morgan. Shirley... View Obituary & Service Information

The family of Shirley J. Hosek created this Life Tributes page to make it easy to share your memories.

Send flowers to the Hosek family.