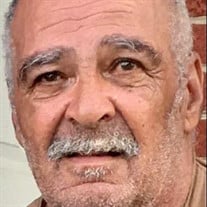 Samuel (Sammy) M. Jackson was born in Hopkins Park, Illinois to Lorene and Samuel Jackson. Those who knew and loved him will always have fond memories of his sense of humor. He was the funniest comedian who didn’t have his own Comedy Central special or You Tube channel. Family and friends were the prime targets of his humor. He attended St. Anne High School and Kankakee Community College, was a veteran of the United States Marine Corps and was last employed by KCCSI. He leaves behind to carry on his legacy, his beautiful and loving wife, Mary Ann (nee Harris) from Chicago Heights and their four children: daughters, Felicia and Latoya, and sons Samuel Jr. and Isaiah, six grandchildren; Marshand Woods Jr., Felicia Woods, India White, Raven Winston, Riley Winston and Neziah Jackson. He is survived by four sisters, Violet Jackson, Rita Smith, Annette Jackson, and Talona Williams and three brothers, Ron (Lisa) Jackson, Dwaine Jackson, and Paul (Lisa) Sampson. To cherish his memory, he leaves behind his dear mother in-law, Fannie Harris, brothers-in-law and sisters-in-law, George, Richard, Charles, Parnell, Augusta, Rosie and Fannie, brother-in- law, Terry Williams and many beloved nieces and nephews. He also leaves his best friends to mourn: Gerald Ingram, Leo Hunt, Marvin Wells, Duwayne Lewis, Myra and Tony White and many other wonderful friends. He was preceded in death by his parents, two sisters, Gwendolyn Jackson and Phyllis Rogers, brother-in-law, Barry Smith and stepfather, Willie Sampson. Visitation at Jensen Funeral Home in Kankakee will be held on Saturday, March 19, 2022 at 10am until the service, officiated by Pastor Mary Jackson. A luncheon will follow from 12-2pm at Jensen Funeral Home in Kankakee.

Samuel (Sammy) M. Jackson was born in Hopkins Park, Illinois to Lorene and Samuel Jackson. Those who knew and loved him will always have fond memories of his sense of humor. He was the funniest comedian who didn&#8217;t have his own Comedy... View Obituary & Service Information

The family of Samuel (Sammy) M. Jackson created this Life Tributes page to make it easy to share your memories.

Send flowers to the Jackson family.