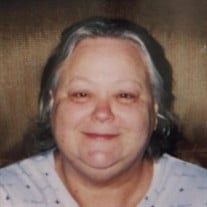 Ruth Hall, 73, of Watseka, passed away on Monday, February 7, 2022, at Watseka Rehabilitation and Health Care Center in Watseka. She was born on February 1, 1949, in New Albany, Indiana, the daughter of Wilbur and Myrtle (Curtis) Hill. In... View Obituary & Service Information

The family of Ruth Hall created this Life Tributes page to make it easy to share your memories.

Send flowers to the Hall family.