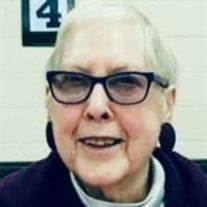 On March 7th 2021, Phyllis Keller passed away peacefully surrounded by her children. As to many this came as a sudden shock, and when Doctors asked her daughters if she had been “acting funny” in the last week or two, the immediate thought was she is always “acting funny.” Phyllis was born in “a house” in Massac County to Harry and Lottie Crayton on March 10th. She was the oldest sister, with one older brother and 4 younger siblings. She is remembered by her younger siblings as being the hip older sister. Phyllis would take them swimming with her and her older friends, bring double presents by, help out with things they needed, show up with her boyfriend Russell on the back of his Harley, and be a caring ear. After Highschool she attended school for a nursing degree, and went on to work at the State hospital in Kankakee IL. She didn’t like it much, as she would recall to anyone who asked her. However, she did meet her husband Russell through contacts within her job. They were introduced by her soon to be mother-in-law. It was NOT love at first sight, she thought he was weird at first. It was his Harley that sealed the deal though, and on August 7th 1960 they were married and moved into a small house in Bradley Il. They went on to have 2 daughters, Eugenia (Gege) and Russella (Russell with a A.) and 1 son Russell (Rusty), they all wondered what their mother was thinking when it came to naming them all after their father. The kids recall memories of sneaking sips of Diet Rite, all out brawls in the backseat when their mother would run into the nearest shoe store (you know back when that was OK), playing on the train tracks until dawn, trips to visit family in Metropolis (for those of you who do not know…. That is home to Superman!) and hosting Bible studies in there home. Phyllis had many hats, literally and non-literally. She was a devoted sister as one of Jehovah’s Witnesses. Known for her comments, parts in meetings, nonjudgmental attitude, being the last one to leave due to conversating with everyone, and her enthusiasm for the Bible and its teachings. Her faith drove her in all aspects of her life. She showed love and compassion for everyone around her. If you needed something, and even if maybe you didn’t, she would give it, if she had it. Although Phyllis never was much of an animal owner, she was adored by all the neighborhood squirrels. Her squirrel feeding habit continued even after much protest from her family with the thinking she would eventually surely have a fall from all the peanuts shells her “friends” would so graciously leave behind on the steps leading into her home. She never did, thankfully, and as anyone who ever went to her house knew, those squirrels were some of the friendliest around. Some would say she was a fashionista; others would say she was a woman with an obsession with all shades of purple. Even her bedroom, purple. Fingernails and toes…. Purple. Once she asked if “you could go on the google and find me a purple couch.” She was dubbed The Great Purple Nana by her first great grandchild, which stuck and carried on as the other 4 were born. She was most adored by her Great Grandkids for her funny faces and bounding laugh. Her great granddaughter Maci just got a kick out of watching her facial expressions when she would talk. Phyllis was known for her quirky jokes, some in the most inappropriate of times… which made them all the better. “I wanted plastic surgery after 80 years of the same old face,” is what she told the Dr after she fell and broke not only her nose but her ankle as well. Getting her to “be serious” was no small feat. She joked she just “wanted to get out of the house,” when she had a reaction to her meds that put her in ICU for a week. “I just needed some extra attention you know,” she told her granddaughter. Along with living an extraordinary and entertaining life, she is also leaving behind a ton of stuff neither of her daughters have any idea as to what to do with. So, if you need any 50-year-old newspapers, random boxes, a ton of QVC items, expired car seats, the first ever sets of Tupperware, those random notebooks with notes like “Taco Bell ----Calories ???” all the random purple things, from sun glasses, to nail polishes, to paperclips, look no further. There are so many things, that could be said, so many stories, so many memories, that so many have of Phyllis who was a loving wife, quick-witted mother, caring grandmother, hilarious great grandmother, beautiful friend, and sister. To those of us that have to carry on without her, please remember her sparkle, her class, her laugh, her jokes, her encouraging words, and that she passed with her undying faith. Surviving are two daughters and their spouses, Eugenia and Robert Horton and Russella and Ray Lazarich. As well as Several Grand Children; Raymond Lazarich, Raechel Lazarich-Norgaard, and Joshua Horton. Great Grand Children; Landon, Maci, Reece, Soren, and Rayven. Phyllis is proceeded in death, by her husband Russell Keller, her son Russell (Rusty) Keller. Jensen Funeral Home in Kankakee is handling the arrangements. There will be no service at this time.

On March 7th 2021, Phyllis Keller passed away peacefully surrounded by her children. As to many this came as a sudden shock, and when Doctors asked her daughters if she had been &#8220;acting funny&#8221; in the last week or two, the immediate... View Obituary & Service Information

The family of Phyllis Keller created this Life Tributes page to make it easy to share your memories.

Send flowers to the Keller family.