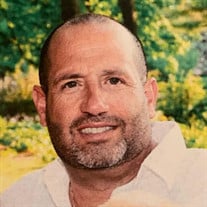 Michael Monteleone, 58, of Naples, Florida, formerly of Chicago Heights, passed away Friday, November 26, 2021 at Riverside Medical Center in Kankakee. He was born in Chicago Heights on January 23, 1963 the son of Melchiore (Mike) and Angela (Vaccaro) Monteleone. Mike was an ambitious, self made, businessman, and owner of Route 1 Chevrolet Buick in Momence, IL, where he met the love of his life, Stacy Hansen. As a couple they were inseparable for over 24 years. Mike was loved and well respected by many, known for his integrity and honesty, as well as his limitless generosity with family, friends, and his community. His energy in his work ethic and building his business was beyond reproach, and it was well known that his word was his bond. In recent years, Mike and Stacy had made their home in Naples, Florida where they enjoyed endless days of competitive pickleball. Mike also had a love for cars, motorcycle riding, boating, home improvement, and many more things. He thoroughly enjoyed life, however short it was. Mike had an immense love and loyalty to his family and friends. He is survived by his mother, Angela Monteleone of Manteno; sister, Joan (Vince) Falaschetti of Frankfort; brother, Joseph (Lorraine) Monteleone of New Lenox; nieces and nephews, Christine Falaschetti of Chicago, Laura (Cody) Smith of New Lenox, Joseph Monteleone of New Lenox, and Melanie (Dillon) Smith of Naperville; a cousin, Rosanne (Chuck) Stewart of Chicago and their daughter and son Katie Stewart (Seattle) and Jimmy Stewart (Chicago). He is also survived by Stacy’s parents, Stan and Lyn Hansen of Bourbonnais; her sister, Christy (Mike Brown) Spenard of Bourbonnais; brothers, Shaun (Elizabeth) Hansen of League City, TX and Branden (Jacqueline) Hansen of St. Anne; nephews and nieces, Riley and Madigan Spenard of Bourbonnais; Izabel and Mary Alice Hansen of League City, TX; and Baine Hansen of St. Anne. A visitation will be held Tuesday, November 30, 2021 from 3pm until 7pm at Jensen Funeral Home, Kankakee. A private Funeral Mass will be held at Maternity of the Blessed Virgin Mary Catholic Church, Bourbonnais. Burial will follow at Good Shepherd Catholic Cemetery, Orland Park. We ask that you please follow the state’s guidelines where masks/face coverings and distancing are concerned. On behalf of the family and the funeral home staff, we would like to thank you for your cooperation. Memorials may be made to wishes of the family.

Michael Monteleone, 58, of Naples, Florida, formerly of Chicago Heights, passed away Friday, November 26, 2021 at Riverside Medical Center in Kankakee. He was born in Chicago Heights on January 23, 1963 the son of Melchiore (Mike) and Angela... View Obituary & Service Information

The family of Michael Monteleone created this Life Tributes page to make it easy to share your memories.

Send flowers to the Monteleone family.