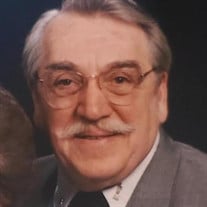 Melvin H. Miller, 89 of Bourbonnais, IL passed away Thursday, August 13, 2020 at the Bickford House of Bourbonnais, IL. He was born on January 11, 1931 in Kankakee, IL to Harry and Gertrude Weiland Miller. Melvin married the love of his life, Dolores Regnier on May 12, 1951 at St. Paul’s Lutheran Church in Kankakee, IL. They were married for 68 years. Mel was a former member of the Aroma Park Boat Club. He loved boating, water skiing, camping and traveling. Also, dancing and skating. Mel was a 20 year member of the Kankakee YMCA. But the thing he loved most was being with his family and all those grandchildren and great grandchildren. Melvin has been a member of the St. Pauls Lutheran Church. Surviving Melvin are two sons and daughter in laws; Devan and Darlene Miller of Texas and Ronnie and Kim Miller of Kankakee, IL. One daughter; Trina Carraher of Bourbonnais, IL. One sister; Anna May Perkins of Kentucky and one sister in law; Virginia Regnier of Aroma Park, IL. and one brother in law Lee Bass of Aroma Park. Melvin and Dolores welcomed 9 grandchildren into the world and 8 great grandchildren. What a blessing that was. He also had many nieces and nephews. Proceeding Melvin in death are his parents and his wife Dolores. A sister and brother in law, Wilma and Wayne Schafroth. One adolescent brother, Kenny Miller and a 3 brother in laws, Dewy Perkins, Jim Westfall and Jim Fulkner. There will be graveside services at Memorial Gardens Cemetery on Tuesday, August 18, 2020 at 11:00am for anyone who would like to Celebrate Melvin’s life. Following CDC guidelines there can only be 50 guest by the grave, but others can stand by their cars to pay their respects. Pastor Karl Koeppen will be officiating. Melvin was a resident at the Bickford House of Bourbonnais for a year and a half. He received the best care from everyone that worked there. The whole family would like to let them know how much they appreciated everything they did for Melvin. Thank you from the bottom of our hearts. The family would like to express their wishes that in lieu of flowers please give your memorial donation to St. Paul’s Lutheran Church, 1780 Career Center Rd Bourbonnais, IL 60914 Thank you. Jensen Funeral Home in Bourbonnais, is handling the arrangements.

Melvin H. Miller, 89 of Bourbonnais, IL passed away Thursday, August 13, 2020 at the Bickford House of Bourbonnais, IL. He was born on January 11, 1931 in Kankakee, IL to Harry and Gertrude Weiland Miller. Melvin married the love of his life,... View Obituary & Service Information

The family of Melvin Herman Miller created this Life Tributes page to make it easy to share your memories.

Send flowers to the Miller family.