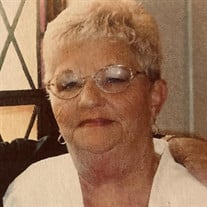 Mrs. Linda Henson, daughter of the late Cecil(Dewey) Samples and Bernice Samples, was born June 17,1940 in Evansville, Indiana. She was raised with her three sisters Helen(Junior)Brown, Joyce(James)Roberts, and Sharon(Ronald)Gilham. Linda wasn’t your traditional southern belle, although she was always very put together. Her nails were always done, hair looking good, makeup applied, and jewelry galore. She was beautiful, smart, strong, and not afraid to speak her mind. She also had her own terms of endearment, and some would make your mouth drop. She was known to cook an amazing meal, especially her country breakfast. A staple for her family was her homemade biscuits and gravy, and don’t dare insult her asking if the biscuits were from a can, or you may have been wearing your breakfast. They say a way to a man’s heart is through his stomach, and if you knew the late Charles R Henson she had his heart. Linda and Charles shared a great love. They wed in 1957 and would have celebrated 63 years of marriage this year. They shared many adventures in their lifetime. Her favorite place to be when not at a slot machine, was on the back of his motorcycle cruising the countryside. They raised their children in Plainfield, Illinois, and then moved to Michigan, Kentucky, and back to their home town near Evansville Indiana. So many memories will remain in the hearts of so many people. Linda’s beautiful life will forever be cherished in the lives of her Children; Chuck(Brenda)Henson, Michael(Char)Henson, Ronald(Donna)Henson, Connie(Rob)Henson, Tammy(Tom)Douglas Grandchildren; Josh(Stephanie)Henson, Trishelle(Luka)Milinkovic, Jamie(Danny)Dennis, Justin(Becky)Horn, Michelle(Eric)Warnick, Shawn(Megan)Henson, Kristen(Ryan)Scott, Paige(Kevin)Henson, Aaron Henson; Great Grandchildren; Gavin Henson, Skylar Milinkovic, Mia Thomas, Stana Milinkovic, Taylor Henson, Kylee Horn, Tinley Henson, Mara Milinkovic, Paige Shelby Scott, Trenton Warnick, Logan Scott, Trace Warnick, Taislee Henson, Jaxson Lhotak, and proceeded in death by great grandchild Tyler Henson. The Kolley family had a special place in Linda’s heart and she loved all of them so much. Linda was able to spend the final weeks of her life with all of her family. Linda lived her life to the fullest up until the very end. In her final days she still had her sense of humor and fighting spirit. She was as tough as they come. She will be forever loved by all that knew her. Her wishes were to be cremated which she was at the Jensen Crematory in Kankakee, Illinois. The family is planning a celebration of her life on June 5, 2021, from 1-3pm at Koehler Funeral Perugia Chapel. Death is the last chapter in time, but the first chapter in eternity. May you Rest In Peace Linda Henson you will be greatly missed by all that knew you. June 17, 1940- October 18,2020

The family of Linda Henson created this Life Tributes page to make it easy to share your memories.

Send flowers to the Henson family.