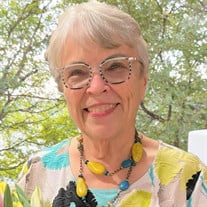 Linda G. Hardin, 75, of San Antonio, TX, passed away peacefully at 8:44am, Friday, March 4, 2022, at her home surrounded by her family. She was born December 8, 1946, in Kankakee, IL, the daughter of Rev. Harry A. Hardin and Frances J. Hardin. The family later moved to Indiana where she graduated in 1964 from Decatur Central High School in Indianapolis. She attended Trevecca Nazarene University and earned a B.S. degree in Elementary Education in 1968. She received her M.S. in Elementary Education from Indiana University in 2000 and her D.Min. (with an endorsement in Single Adult Ministries) from Northern Baptist Theological Seminary in 2000. The first chapter in Linda’s professional career began in West Newton, IN, as an elementary teacher in second, fourth and fifth grades. After 20 years with the Metropolitan School District of Decatur Township, Linda moved to the global headquarters of the Church of the Nazarene in 1988. There she served as the Coordinator of Single Adult’s, Women’s, and Young Adult Ministries until her retirement. During her retirement, Linda spent several years enjoying the company of her family, living with her niece, Kim, in Texas then in Illinois with her nephew, Carlos. Linda was a leader in every situation in which she found herself, serving on numerous boards for the global and local Church of the Nazarene. She served as the President of the Decatur Education Association and as the first Vice-President of Evangelical Women Leaders, amongst many other boards over her career. Linda was a well-known and respected conference leader, presenter and organizer, facilitating events such as Come to the Fire, SOLOCON, and others. Linda loved traveling the world, taking several cruises and trips around the globe, but always returning home quickly to the family she loved so dearly. She is survived by three sisters Diane (Robert) Miller of San Antonio, TX, Martha Walters of Henderson, NV, and Becky (Neal) Clark of Mansfield, IL; two nieces Kimberly (Brad) Stewart-Beauchamp of San Antonio, TX, and Marjorie (Jeremy) Orr of Tolono, IL; two nephews Marc (Annie) Walters of Henderson, NV, and Carlos Lonberger, II (Kristen) of New Albany, IN; seven great-nephews and three great-nieces. She was preceded in death by her father, Rev. Harry A. Hardin and her mother, Frances J. Hardin. A Celebration of Life will be held on April 30, 2022, at College Church of the Nazarene University Avenue in Bourbonnais, IL. Visitation begins at noon with the service to follow at 1pm. The service will be live streamed by the church. The committal will be private at The Garden and Columbarium at Kelly Prayer Chapel on the campus of Olivet Nazarene University. Memorials can be sent to Church of the Nazarene, Woman’s Ministries, 17001 Prairie Star Pkwy, Lenexa, KS 66220 or online at https://give.nazarene.org/donate/f/137186 and to Kankakee County Living Alternatives Pregnancy Resource Center, PO Box 1952, Kankakee, IL 60901 or online by selecting “Kankakee” at https://www.pregnancyresourcecenter.org/donations/. Arrangements by Jensen Funeral Home, Kankakee, IL. Friends are invited to send condolences to the family or to share memories of Linda by visiting www.jensenmemorialchapel.com.

The family of Linda G. Hardin created this Life Tributes page to make it easy to share your memories.

Send flowers to the Hardin family.