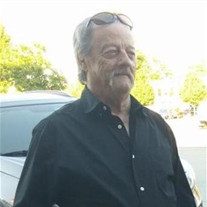 Leonard Arthur Flahive , 73, of Bradley Illinois, passed away April 10, 2019. Leonard was born to David and Louella Ralls Flahive August 11, 1945 in Glenwood Illinois. He leaves as his legacy 13 children: Rhonda, Leonard Flahive Jr (Cindy), Kimberly Duncan(Flahive)(David Duncan), Jennifer Mirza (Quinn)(Joe Mirza) Michelle Quinn, Christopher Quinn, Mohammad (Emily Aguilar) Mansour, Fatima Mansour (Danny), David Whiley, Dennis Nemeth (Sarah), Joshua Flahive (Juanita), David Flahive, Jamie Flahive, Vanessa Turner (Flahive)(Douglas Turner), Rebecca Mitchell, David Mitchell. He also leaves to cherish his memory 7 siblings. Margaret ( Sherman) Propes, Shirley Gains (Steven Culpepper) Chuck (Rhonda) Flahive, Jack (Patty) Flahive, Bart Flahive, Trudie (Johnny) Hughes Dale (Beth)Flahive. He had 29 grandchildren and 15 great-grandchildren. He also leaves behind Robert Ellsworth, Glen Maybry, and many other nieces and nephews Leonard was preceded in death by his parents, 2 Sisters, and a Brother. Leonard was a roofer. He fought for our country in Vietnam in the Army. He came back with PTSD and may not have been at his best most of his life but he had an eye opening reaction 19 years ago. He tried to make amends for his actions and his family is very proud of him for that. He may not have been the ideal Brother/father but he definitely tried to make a change for the better. He will be deeply missed by many. May God bless him and keep him in his Glory. A celebration of Leonard's Life will be held at a later date. Cremation rites were accorded. Jensen Funeral Home is handing the arrangements. Please sign Leonard's guestbook

The family of Leonard Flahive created this Life Tributes page to make it easy to share your memories.

Send flowers to the Flahive family.