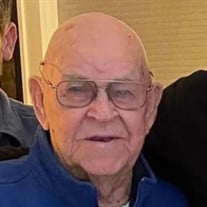 Not sure what to send?

Joseph E. Arbour Jr. of Bourbonnais, IL, passed away Monday, June 6th, 2022, at Riverside Medical Center, Kankakee, IL. A Celebration of Lives will be held in remembrance of Joe and his late wife and beloved mother, grandmother, and great-grandmother, Joanne, who passed October 12th, 2014. The celebration will be held at Jensen Funeral Home, 3639 State Route 17, Kankakee (Old Town and Country building off Route 17) on Tuesday, June 28, 2022 from 4pm until 7pm. Mr. Arbour was born April 02, 1933, in West Kankakee, IL. He was the son of Joseph E. Arbour Sr. and Dorothy Patchett Arbour. Joe married the love of his life, Joanne on January 18th, 1953 in Kankakee, IL. He is survived by two sons and daughters-in-law, Joseph and Judy Jo Arbour of Kankakee, Michael and Lisa Arbour of Bourbonnais; four grandchildren, JT (Barb) Arbour, Jeffrey Arbour, Melissa (Derek) Shrout, and Monica (Mike) Slize; nine great-grandchildren, Cayden and Tyson Arbour, Seth McLean, Sophie, Sadie, and Selah Shrout, as well as Brody Kelly, Emma, and Henry Slize; 3 brothers, Charlie Arbour of St. Anne, Kenny (Gerry) Arbour of Fairview Heights, and Howard (Bunny) Arbour of Buckingham; Many nephews, nieces, great-nephews, and great-nieces, who all loved him very much. Joe was preceded in death by his parents; sisters, Dorothy Jean and Baby Vickie Lynn; brothers Ronnie and Larry Arbour; wife, Joanne; and great-grandson Cody Thomas Arbour. He served in the United States Army during the Korean War. He retired from Bradley Roper. During his time there and after Joe and Joanne built, managed, and maintained the Arbour Apartments in East Bradley. He was never scared of demanding work. He continued woodworking, building thousands of birdhouses and hundreds of cat climbers up until a few weeks prior to his passing. Lifetime partners, Joe and Joanne, enjoyed traveling all over the country, taking fishing trips, and many more activities, so long as they were with each other. He did have horseshoe league for decades, which he did with friends. Joe and Joanne also surprised over 30 families a year with boxes of gifts at Christmas time and worked together to help less fortunate families, for no other reason than it was the right thing to do. They considered themselves lucky to be able to help when they could. Joe’s legacy will live on through the ones who knew him. He set a positive example as a man and as a human being. He always had positive uplifting things to say and was always willing to share the good and bad of his past. He and his son Joe were best friends and ate lunch with each other just about every day. He was his grandchildren's guide, mentor, friend, and champion. Jovial by nature, he was loved by everyone who knew him. He was at every baseball game for the last 35 years for his grandchildren and great-grandchildren. He is deeply missed and loved by those left behind. Joe spent the last 4 months living with his son, Joe and daughter-law, Judy Jo. He was so happy there. He told everyone he was being spoiled. Memorials may be made to Because of Cody. Because of Cody is a NFP established in Joe’s great grandson’s memory to educate about SIDS and Safe Sleep for Babies. Checks and donations may be made out to “Because of Cody” and sent to 1203 W. Station Street, Kankakee, Illinois 60901.

Joseph E. Arbour Jr. of Bourbonnais, IL, passed away Monday, June 6th, 2022, at Riverside Medical Center, Kankakee, IL. A Celebration of Lives will be held in remembrance of Joe and his late wife and beloved mother, grandmother, and great-grandmother,... View Obituary & Service Information

The family of Joseph E. Arbour Jr. created this Life Tributes page to make it easy to share your memories.