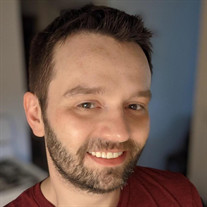 Jonathon David Bacon was 37 years old (Feb 12, 1984 – Nov 8, 2021). He was the youngest of 9 children. He lost 3 siblings and often struggled with pain and sorrow. He was a computer wizard, he loved animals and even rescued them. He loved all things Japanese, Sailor Moon, and video games. He tutored students of all ages and at KCC. He was a member of the Gay-Straight Alliance. Jon traveled all over the country as he enjoyed learning of new places, especially the history, his favorite subject. He knew much of Greek Anthology. He is survived by his father, Donald Bacon of Bourbonnais, his mother, Kimberli Bacon of Kankakee, his 4 brothers; Donald (Angie) Bacon Jr., Jim (Teri) Bacon of Bourbonnais, Steve (Nadine) Bacon of Frankfort, IL., Noah (Emma) Parks, a sister; Vicky Bacon of Bourbonnais, many aunts and uncles, nieces and nephews, cousins, a brother-in-law; Steve Williams and his daughter, Hallie Williams, his significant other; Jason Kucera, and his children; Andrea and Austin. We will miss him always. He is preceded in death by his sister, Beth (Bacon) Williams, and 2 brothers: Kenneth Bacon and Ryan Parks. There will be a visitation on Sunday, November 14, 2021 at the Bourbonnais Sportsman’s Club from 1-4pm. Memorials may be made to the wishes of the family.

The family of Jonathon David Bacon created this Life Tributes page to make it easy to share your memories.

Send flowers to the Bacon family.