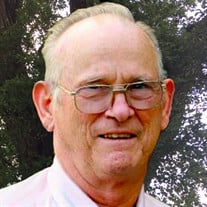 John L. Wright, 76, of Kankakee, passed away Saturday (Sept. 8, 2018) at the Illinois Veterans Home at Manteno. He was born Feb. 25, 1942, in Harrisburg, the son of Virgil Howard Wright and Rosa Mae (Healy) Wright. John married Carolyn Louise (Morris) Wright on Dec. 8, 1962, in Harrisburg. John was a pastor and worked in the HVAC field. He proudly served our country in the U.S. Air Force AIC from Dec. 8, 1960, to November of 1964. John was affiliated with the Church of God, with headquarters in Tennessee. He loved playing golf and gardening and being part of the American Legion. Surviving are his wife; son, John F. Wright (Karen); daughter, Carol Sharron (Timothy) Orrick; brothers and sisters-in-law, William (Edna) Wright, and Charles (Jeanean) Wright; grandchildren, Scott (Jessica) Wright, Sean (Kayla) Wright, Samantha (Nathan) Utter, Jacob and Dominique Feuquay, Sarah Orrick and Matthew (Rachael) Orrick; and great-grandchildren, Brogan and Mila Wright, Alexis and Alik Kennedy and Kenzie Orrick. Preceding him in death were his parents; four brothers and three sisters-in-law, the Rev. Virgil E. and Natile, Harold, David and Judy and Wayne and Stella Wright; and also a great-grandchild, Emilee Orrick. John's Celebration of Life will be; Visitation from 4 p.m. to 7 p.m. Tuesday, Sept. 11, at Church of God Worship Center, 420 Cardinal Drive, Bourbonnais. His service will be at 11 a.m. Wednesday, Sept. 12, also at the church, with the Rev. Harold Miller and the Rev. Rick Sexton officiating. Military rites will be accorded. A memorial service will also be held on Friday, September 14, 2018 at the Church of God on Land Street in Harrisburg, IL Cremation rites will be accorded and burial will be at a later date. Memorials may be made to the wishes of the family. Please sign his online guestbook at jensenfuneralhome.com.

The family of John L. Wright created this Life Tributes page to make it easy to share your memories.

Send flowers to the Wright family.