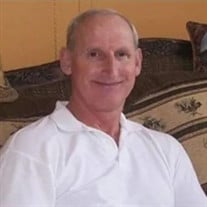 John C. Waschle, 74 passed away on Wednesday March 9, 2022 in Lakeland, Florida. He was born November 25, 1947, in Pontiac, IL the only child of Shirley A. Bowers Waschle Tolbert and Leo J. Waschle. John was a long-time resident of Pontiac, IL. He attended Pontiac Schools and then went on to enlist in the United States Army where he served his country as a medic from 1967-1973. He was employed by Pontiac Correctional Center in the late 70s and moved on from there to work at Illinois American Water Company as a plant operator until his retirement in January of 2013. In his earlier years, John was an avid water skier and participated in many tournaments around the state. In retirement, he was a full-time RVer and enjoyed traveling. He liked a good game of pool with friends, motorcycle trips and hanging out with family and friends. He married Nancy Bryant Waschle on September 6, 1970, they divorced in 2004. She survives in Pontiac along with their two children Jaime(Gary) Wykes, Odell and Aaron Waschle, Flanagan. Also surviving are his grandchildren, Carter and Gavin Wykes, and Alivia Waschle. John married his loving wife Jeniece Parr Waschle on August 4, 2005. She also survives along with step-sons Jacob(Rebecca) Curtis, Joshua(Beth) Curtis. Also surviving are his step-grandchildren, Madigan Curtis, Mika Curtis, Cody(Brooke) Curtis-Mudd, Anthony Curtis, Isabella Curtis, Jerred Goodwin, Cameron Pierce, Alex Reinagle and one great-grandaughter Amberleigh Curtis-Mudd. John is also survived by his mother-in-law, Bernice Parr; brothers-in-law, James(Sharlene) Parr and Thomas (Tina) Parr; sisters-in-law, Juanita(Dave) Landsmann and Dianna(Bud) Gilbert. Also surviving are numerous step nieces and nephews, cousins, and friends all over the country who are too numerous to mention. He was proceeded in death by his mother and father; his father-in-law, James E. Parr and many beloved aunts, uncles and cousins. A Celebration of Life Open House will be held on Saturday, March 26th 2022 from 12:00-2:00p.m. at Jensen Funeral Home. An additional Celebration of Life will be held on Sunday, March 27th at Pub 13 in Pontiac from 3:00-5:00p.m. Memorials can be made to Pontiac Township High School Athletic Department.

John C. Waschle, 74 passed away on Wednesday March 9, 2022 in Lakeland, Florida. He was born November 25, 1947, in Pontiac, IL the only child of Shirley A. Bowers Waschle Tolbert and Leo J. Waschle. John was a long-time resident of Pontiac,... View Obituary & Service Information

The family of John C. Waschle created this Life Tributes page to make it easy to share your memories.

Send flowers to the Waschle family.