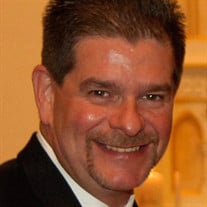 John S. Atkinson III, 63 of Manteno, passed away Thursday, June 11, 2020 at Riverside Medical Center with his daughters at his side following a short illness. He was born June 5, 1957 in Kankakee, IL to Leona Mae Deschand and John S. Atkinson Jr. Better known to most as Jack, he was the baby in a family of five. They were a military family in Bradley raised in a loving home full of music, laughter, discipline and family. Jack spent his youth running the neighborhood with friends, playing football and getting in trouble with the nuns at school. His love for sports, especially football, carried throughout his life. He was an avid Detroit Lions and Red Wings fan ridicule be damned! He absolutely loved the challenge of fantasy football and the friendships that developed from the leagues he was involved in. Jack started his adult career at Henkel back in the 80’s and from there transitioned to Stepan Company in Joliet. He was a chemical manufacturing operator for 30 years when he switched gears and entered the gambling and gaming business as a technician for Accel Entertainment. Jack didn’t have any sons but that didn’t stop him from sharing what he loved with his girls. He taught and even coached his girls in youth softball, brought them to football games in Michigan, and even how to fish (that took a lot of patience!). As he got older, he grew to enjoy the game of golf on his days off or spending time with his extended family at OTR. He loved to cook and could feed an army. He especially loved cooking for friends and family and they loved reaping the benefits! Jack shared his passion for great music with his girls when they were growing up, something they will always cherish. He was extremely proud of his grandchildren and loved watching their sporting events. His loud cheering in the crowd will certainly be missed. He is survived by his daughters Kristin (David) Ciarrocchi and Alyssa (Lee) LaMontagne, five adoring grandchildren Jake, Morgan, and Gianna Ciarrocchi and Madison and Kennedy LaMontagne; two sisters Judith Sutherland and Cheryl Atkinson; one aunt Rose Kelly; one nephew Steven Sutherland; one special niece Alana (Gary) Britt who brought joy and laughter to him until the end. Also, several cousins and special lifelong friends Dan and Sharon Power. Preceding him in death were both parents, several uncles, one aunt and one niece. Cremation rites have been accorded. Memorials may be made to his honor and sent to Jensen Funeral Home for his grandchildren’s education. Due to the COVID-19 pandemic, a celebration of life will be scheduled at a later date. Jensen Funeral Home is handling the arrangements.

John S. Atkinson III, 63 of Manteno, passed away Thursday, June 11, 2020 at Riverside Medical Center with his daughters at his side following a short illness. He was born June 5, 1957 in Kankakee, IL to Leona Mae Deschand and John S. Atkinson... View Obituary & Service Information

The family of John S. Atkinson III created this Life Tributes page to make it easy to share your memories.