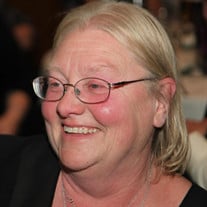 JoCarol Emling, 67, of Bonfield passed away December 27, 2021, at Amita St Mary’s Hospital in Kankakee. She was born on August 29, 1954, in Kankakee, the daughter of Edwin and Pauline (Barton) Tholen. On October 4, 1974, she married Rodney Emling at St. Paul's Lutheran Church in Kankakee. JoCarol was the owner of Emling Canvas Products. She was an officer of the Bonfield Lions’ Club and an officer of the Bonfield Community Center. In her younger years, JoCarol volunteered as an EMT and firefighter for the Salina Township Fire Protection District. JoCarol enjoyed quilting, crocheting, and spending time with her family. She is survived by her husband, two daughters, Cherie Emling (Stanley Heimerl) of Monee and Robin (Joseph) Armellino of Beecher, three grandchildren, Andrea Entwhistle, and Riley and Haley Armellino. She is also survived by her brother Michael Tholen, her sisters-in-law and many nieces and nephews. JoCarol is preceded in death by her parents, her son, Jeremiah Emling, and her sister, Terry Barnard. Visitation will be held at Jensen Funeral Home in Kankakee on Sunday, January 2, 2022 from 2:00 pm – 7:00 pm. Service will be held at Jensen Funeral Home on Monday, January 3, 2022 at 10:00 am. Pastor Michael Stein will officiate. A burial will follow at Bonfield Cemetery and a luncheon at the Bonfield Lions’ Club.

The family of JoCarol Emling created this Life Tributes page to make it easy to share your memories.

Send flowers to the Emling family.