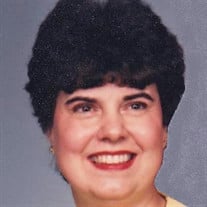 Joanne Carol Marcotte, 78, of Bourbonnais, went to be with her Lord on Monday (July 24, 2017) after a lengthy illness. She passed away at Miller Healthcare and Rehabilitation Center in Kankakee. She previously had resided at Riverside Senior Life and Memory Care in Bourbonnais. She was born Joanne Carol Arthur, the fifth of six children, on Jan. 6, 1939, a daughter of Alfred C. and Pearl (Bevan) Arthur, in Kankakee. Joanne attended public school and graduated from Kankakee High School in 1956. One proud thrill was when she was named Kankakee County Fair Queen. During high school, she had worked as a carhop at The Big Top drive-in. She later worked for Armour Pharmaceutical and Ray Christian Supply prior to marriage. She married Earl P. Marcotte Jr. on Oct. 1, 1960, at Calvary Bible Church in Bradley. Joanne gave birth to three children: Mark, Timothy and Melody. Most of her adult life she was a homemaker, though she took several jobs as the children began to grow up and spread their wings. She had been employed as receptionist/secretary at Hemstreet Schneider Travel Agency, Evangelical Church Alliance, Calvary Bible Church and as a Wal-Mart cashier. She also was a loving grandmother who spent several years as a full-time caregiver/sitter for some of them. Joanne loved her Calvary Bible Church family, many areas of which she had been quite active throughout much of her life. She loved to sing soprano in the choir until her later years. She and her husband had taught the early childhood Sunday school class for more than 15 years, and she was very active in the Women's' Missionary Society. Throughout her life, most of her closest friends were those brothers and sisters in Christ with whom she had attended church. In addition to her husband, Earl, of Bourbonnais, she is survived by her son, Mark (Jill) Marcotte, of Herscher; daughter, Melody Morrissette (Tom Emmart), of Bradley; daughter-in-law, Kristy Marcotte, of Bonfield; two sisters, Gloria Toledo, of Kankakee and Gladys Fowler, of Kankakee; four sisters-in-law, Barbara Arthur, of Bradley, Gladys Arthur, of Healdsburg, Calif., Clarissa Kibbons, of Florida, and Marla (Bob) Ostrowski, of Kankakee; brother-in-law, Steve (Gail) Marcotte, of Kankakee; 10 grandchildren, Laura (Chris) Kimmel, Ryan Marcotte, Elizabeth Marcotte, Sarah (Jacob) Marciniak, Andrew (Sara) Marcotte, Matthew Marcotte, Max (Anne) Diaz, Parker Morrissette, Bennett Morrissette and Cooper Morrissette; and one great-grandson, Jude Kimmel. Also surviving are many cousins, nieces and nephews, as well as faithful friends, Linda and Dave Suprenant, Barbara Arthur, Donna Hanks, Judean Benston and Annette Karnes. Preceding her in death were her parents; brothers, Richard Arthur and Ronald Arthur; sister, Beverly (Clayton) Fortin; and son, Tim Marcotte. Cremation rites have been accorded. There will be a memorial/celebration of new life service at 11 a.m. Friday, Aug. 11, beginning with visitation at 9 a.m. at Calvary Bible Church, 2587 E. Armour Road, Bourbonnais. A luncheon at the church will follow. Memorials may be made to Hospice of Kankakee Valley. Please sign her online guestbook at jensenmemorialchapel.com.

Joanne Carol Marcotte, 78, of Bourbonnais, went to be with her Lord on Monday (July 24, 2017) after a lengthy illness. She passed away at Miller Healthcare and Rehabilitation Center in Kankakee. She previously had resided at Riverside Senior... View Obituary & Service Information

The family of Joanne Marcotte created this Life Tributes page to make it easy to share your memories.

Joanne Carol Marcotte, 78, of Bourbonnais, went to be with her...

Send flowers to the Marcotte family.