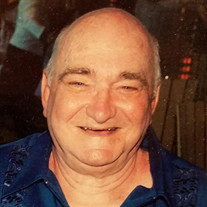 On, December 20, 2019, Henry (Hank) F. LaBrec, loving husband, father, grandfather and papa passed away peacefully, at the age of 83 at Ascension Our Lady of Victory Hank was born on February 17, 1936 in Midlothian, IL to Henry R. and Dorothy (Rombach) LaBrec. Hank proudly served in the United States Navy and was on the Navy Swim Team while he was stationed at Pearl Harbor in Hawaii. Hank worked in the grocery industry as a manager for for many years. He was a Village Trustee, Mayor and Police Commissioner for the Village of Dixmoor, Il. Hank was known for his sharp sense of humor and one-liners. He loved to read, especially on the deck, working jig saw puzzles, and sports memorabilia. He treasured his fur companions, all rescues, over the years, Reba, Harley and Ty, who provided him with unending devotion and companionship. Hank married his wife, Loretta (Rodrigues) LaBrec on November 14, 2000, often telling everyone his only regret was he hadn’t met her sooner. Left with many treasured memories are his wife Loretta, children Harley (Sharon) LaBrec, Bryan (Kathy) LaBrec, Loretta Lynn (Les) Sanders, Step-son, Jeremy (Mary) Rodrigues. Brother, Robert LaBrec. Brother-in-law Ron Rodrigues. And his beloved grandchildren and great grandchildren, he says he’s sorry he terrorized you with his false teeth! Preceding him in death are his parents, son Gregory F. LaBrec, Sister & Brother-in-law Shirley & Lavon Hampton, Father-in-law Tony Rodrigues, Mother-in-law Lorrayne Karas. Cremations rites have been accorded. Per Hank’s wishes there will be no memorial services but we’ll leave you with this thought…please don’t cry because he’s gone; instead be happy that he was here.

On, December 20, 2019, Henry (Hank) F. LaBrec, loving husband, father, grandfather and papa passed away peacefully, at the age of 83 at Ascension Our Lady of Victory Hank was born on February 17, 1936 in Midlothian, IL to Henry R. and Dorothy... View Obituary & Service Information

The family of Henry "Hank" F. LaBrec created this Life Tributes page to make it easy to share your memories.

Send flowers to the LaBrec family.