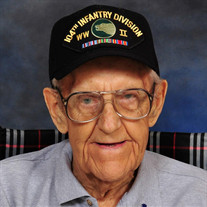 Harvey Joseph Hackley, age 96, passed away peacefully with family at his side on August 28, 2017. Harvey graduated from Bradley High School in 1939. He was the last surviving member of Bradley’s first basketball team to play in the State High School Championships. He proudly served in the U.S. Army during WWII in Germany. He was a life-long member of Bradley Evangelical United Methodist Church, where he met and married the love of his life, Mary Louise Outsen. Mary died in 2015, and Harvey could not understand why she left first. Now, after 56 years of marriage they are together again in God’s loving hands. Harvey was born in Bradley IL on April 29,1921 to Margaret and Harvey Hackley Sr. God and family guided his life and provided him and all who knew him a lifetime of wonderful memories including family reunions, holiday gatherings, driving trips throughout the country, visits to Riverview Amusement Park and Wrigley Field. He lived long enough to see his Cubbies finally win it. He is survived by two sons and daughters-in-law, Jeff and Carolyn Hackley of Bradley and Kerry and Jo Ann Bierman of Columbus, OH; five grandchildren, Josh Hackley of Bradley, Corbin (Michelle) Hackley of Champaign, IL, Cameren (Christie) Hackley of Ft Myers, FL, Peter (Carolyn) Bierman of San Francisco and Emily (Brian) Knoppe of Columbus; three great grandchildren, Kira and Alexander Bierman and Benjamin Knoppe; sister Mardelle Baber of Bourbonnais, IL and sister-in-law Betty Outsen of Manteno Harvey was preceded in death by his sister Margery Cart. In lieu of flowers, a memorial gift may be made to Hospice of Kankakee Valley. http://www.hkvcares.org/make-a-difference/make-a-donation Cremation rites have been accorded by Jensen Memorial Chapel Bourbonnais, Illinois. His obituary may be viewed at http://www.jensenmemorialchapel.com/ where a tribute wall is available for stories and photos. A memorial service will be held at a later date to be determined.

Harvey Joseph Hackley, age 96, passed away peacefully with family at his side on August 28, 2017. Harvey graduated from Bradley High School in 1939. He was the last surviving member of Bradley&#8217;s first basketball team to play in the State... View Obituary & Service Information

The family of Harvey J. Hackley created this Life Tributes page to make it easy to share your memories.

Send flowers to the Hackley family.