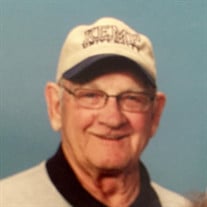 Harold F. Kemp, 85, of Bourbonnais, passed away Thursday (May 18, 2017) at his home He was born Aug. 11, 1931, in Essex, the son of William and Marie Richter Kemp. Harold married Susan Dickerson on Nov. 4, 1983, in Kankakee Harold had worked at Mobil Chemical, Valspar and retired from the Bourbonnais Elementary School District. He served in the U.S. Navy. Harold was a member of St. Paul's Lutheran Church, Kankakee, a lifetime member of the Bradley-Bourbonnais Sportsman Club, and enjoyed bowling, golfing and playing horseshoes. Surviving are his wife; son, Andy and Heather Kemp, of Bourbonnais; two brothers, including a twin brother, Gerald and Bill (Shirley) Kemp; four sisters-in-law, Mary Kemp, Norita Kemp, Anne Dickerson and Joan (Mel) Brown; and five grandchildren, Matheu, Savana, Nathan, Adalyn and Spencer; along with many nieces and nephews. Preceding him in death were his parents: three brothers, LeRoy, Don and Richard Kemp; and one sister, Marie Kroll Per Harold's wishes, there will be no visitation. A celebration of his life with family and friends will be at a later date. Cremation rites have been accorded Memorials may be made to the charity of the donor's choice. Please sign his online guestbook at jensenmemorialchapel.com.

The family of Harold F Kemp created this Life Tributes page to make it easy to share your memories.

Harold F. Kemp, 85, of Bourbonnais, passed away Thursday (May...

Send flowers to the Kemp family.