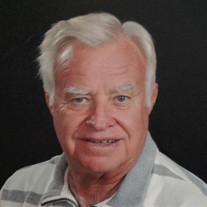 Gerhard Hansen, 82, of Aroma Township in St. Anne, passed away Wednesday (Aug. 28, 2019) at his home surrounded by his loving family. He was born Feb. 7, 1937, in Neumunster, Germany, a son of Karl and Paula Christensen Hansen. He married Lillian Jackson Coffman on Feb. 4, 1985. She survives. Gerhard was a very proud American citizen, even though he was born in Germany. He came to America on Jan. 31, 1959, on a permanent visa. His uncle was his sponsor. He had to speak English. Ten months later, he received a letter from the president of the United States saying he needed to enlist, so Gerhard joined the U.S. Army in 1960 — the beginning of the Vietnam War. He served his country proudly. In 1974 Gerhard become a U.S. citizen; it was one of the proudest days of this life. He was a graduate of the University of Illinois with high honors in mechanical engineering. Gerhard worked as a mechanical engineer manager for General Foods-Quakers-Latz in Kankakee and Eurskirchen, Germany. He was an avid boater and fisherman, and he loved water skiing. Gerhard was a member of both Aroma Park Boat Club and Kankakee Valley Boat Club. He attended Peoples Church in Bourbonnais. Gerhard loved spending time with family; and his grandchildren and great-grandchildren melted his heart. In addition to his wife, he is survived by his stepsons, Jeff (Lynetter) Coffman, David Coffman and Philip (Robin) Coffman; stepdaughter, Vicki Coffman Ravens (Pete) Stich; brother, Karl Heinz (Marita) Hansen; brother-in-law and sister-in-law, Chuck and Gwen Jackson; sisters-in-law and brother-in-law, Phyllis (Austin) Knecht and Thelma Alcorn; 12 grandchildren; 11 great-grandchildren; nephews, Christian, Matthais and Louis Hansen, of Germany; and many nieces and nephews of his wife’s family. Preceding him in death were his parents, many brothers-in-law and sisters-in-law, and several nieces and nephews. Cremation rites have been accorded. A celebration of his life will be held at Aroma Park Boat Club on Sunday, September 8, 2019. Visitation from 11:30am to 4:00pm. A lunch will be at 1:00pm with Celebration of Life starting at 3:00pm. Nephew, Darrin Reed will be officiating. Funeral arrangements are by Jensen Funeral Home, Bourbonnais. Memorials may be made to Aroma Park Boat Club, 199 Boat Club Road, Aroma Park, IL 60910; Kankakee Valley Boat Club, 1586 Cobb Blvd. Kankakee, IL 60901; or Hospice of Kankakee Valley, 482 Main St. NW, Bourbonnais, IL 60914. The family would like to say, “a special thank you to all of the Hospice of Kankakee Valley employees and volunteers. Jerry, Gerhard loved your long visits so much, thank you.” They would also like to thank everyone who sent cards and food, called and visited. “Your thoughtfulness is deeply appreciated.” Please sign his online guestbook jensenmemorialchapel.com.

Gerhard Hansen, 82, of Aroma Township in St. Anne, passed away Wednesday (Aug. 28, 2019) at his home surrounded by his loving family. He was born Feb. 7, 1937, in Neumunster, Germany, a son of Karl and Paula Christensen Hansen. He married Lillian... View Obituary & Service Information

The family of Gerhard Hansen created this Life Tributes page to make it easy to share your memories.

Gerhard Hansen, 82, of Aroma Township in St. Anne, passed away...

Send flowers to the Hansen family.