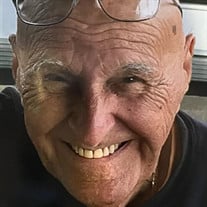 Gerald Arthur Schrempf, 89, of Seminole, Florida, formerly of Aroma Park, Illinois passed away Thursday, April 21, 2022 at Riverside Medical Center. He was born in Kankakee on February 3, 1933 the son of Mr. and Mrs. Howard Schrempf and grew up on the family farm in St. Anne. He married Blanche Rose Saltzgiver on January 21, 1956. He proudly served in the United States Army as a Crane Shovel Operator in the 89th Engineer Port Construction Company where he earned a National Defense Service Medal. Mr. Schrempf was employed as a welder most of his life. After retiring from A.O. Smith of Kankakee he relocated to Florida. Gerald had many skills and could fix about anything, so he continued working as repair-handy many and helping many people. When asked by family members a couple years ago why he didn’t stop working he replied, “I have to keep helping the old people, so they don’t get taken advantage of.” He was the kind of guy that had to have a project and always kept busy. Mr. Schrempf loved coming back to Aroma Park to help and visit with friends and family here for the summer months staying in his camper on the river and fishing with his son, Jerry. He was a longtime member of the Aroma Park American Legion post #1019. Surviving is his son and daughter-in-law, Jerry and Wendy Schrempf, of Kankakee; grandchildren, Amanda Lopez, Jeremy Schrempf, Fransico, Maria, Michael Corona, Amy Deem, Randy, Heather, Ray Seibert, Sandra Senesac, and Danielle Peach; 28 great grandchildren; and a special friend, Brenda Potthast. In addition to his wife who passed January 1, 2014; he is preceded in death by a son, Daniel Schrempf; two daughters, Diana Corona and Brenda Seibert. A visitation will be held Sunday, May 01, 2022 at Jensen Funeral Home, Kankakee from 2pm until 6pm. A funeral service will be held at the funeral home, Monday, May 02, 2022 at 10am. Burial will immediately follow at Aroma Park Cemetery. Memorials may be made to the Aroma Park United Methodist Church, 210 West 3rd Street, Aroma Park, IL 60910.

Gerald Arthur Schrempf, 89, of Seminole, Florida, formerly of Aroma Park, Illinois passed away Thursday, April 21, 2022 at Riverside Medical Center. He was born in Kankakee on February 3, 1933 the son of Mr. and Mrs. Howard Schrempf and grew... View Obituary & Service Information

The family of Gerald A. Schrempf created this Life Tributes page to make it easy to share your memories.

Send flowers to the Schrempf family.