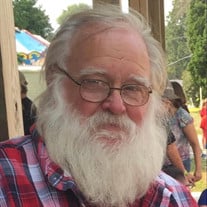 Fredie J. Tapp, 73 of Bonfield, IL passed away Sunday, August 30, 2020 at his home, surrounded by his loving family. Fredie was born June 4, 1947 in Blytheville, AR to Lawrence A. and Lucille M. Roach Tapp. He married Helen Marie Johnson on July 30, 1976 in Kankakee, IL Fredie is survived by his wife: Helen and four sons; Richard and Chris Naranjo, Lawrence Tapp and Lisa Fortin, Aaron Tapp and Milisa Prisock, and Leon and Carrie Tapp all of Bourbonnais. One sister and brother in law; Judy and Mark Whitehead of Kankakee IL. Four brothers and sister in laws; James Allen Tapp of Manteno, Larry and Gina Tapp of Limestone, Jerry and Sandy Tapp of Emington, IL, and Jeff and Denise Tapp of Bradley. Eight grandchildren; Jordan Naranjo, Abigayl Naranjo, James Naranjo, Zoe Tapp, Hope Tapp, Kai Tapp, Piper Tapp, Leon Tapp Jr. and many nieces and nephews. Fredie is proceeded in death by his parents; Lawrence and Lucille Tapp. He was retired from Nucor Steel and worked as a Shear Operator. Fredie was also owner of Westside Trucking in Bonfield, IL. He served in the Navy. Fredie was a gardener and love more than anything playing with his grandchildren. A private family service will be held up at Abraham Lincoln National Cemetery in Elwood, IL In lieu of flowers memorials may be made to the wishes of the family. Jensen Funeral Home is handling the arrangements.

The family of Fredie J. Tapp created this Life Tributes page to make it easy to share your memories.

Send flowers to the Tapp family.