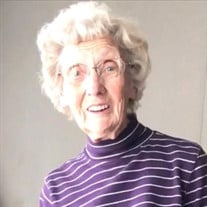 MANTENO -- Known as “Grandma Shaw” to countless children and all their friends, some now middle-aged or beyond, Bessie Frances Shaw, age 92, most recently of Heritage Woods Assisted Living of Manteno, passed away peacefully on Friday, March 26, 2021. She is survived by her daughter, Nancy (William) Hengstler, of Naples, FL, and foster-daughter, Vicky Benoit (Don) Prater, of Panama City, FL; as well as her “Aunt-in-law” and dear “sister”/friend, Loella Shaw, the wife of the late Robert Shaw of Rankin. Also, surviving are Grandchildren Michael Dee Bonds and Misty Thornton, both of Bourbonnais, IL; Jennifer (Carla) Cochran of Indianapolis, IN; ; Sara Martin of Deerfield, IL; Foster-grandson, Adam (Lauren) Prater of Jamul, CA; and step-grandsons, Thomas Angle of Indiana and William Angle of Sevierville, TN and their families. In addition, there are eighteen great-grandchildren and seven great-great grandchildren. She was preceded in death by her former husband, Cecil (“Bud”) W. Shaw, Jr.; daughter, Patty Peppin; son, James W. Shaw; grandson, J. Douglas Martin; and, great-great grandson, Travis Bristow, Jr. Frances, as she was known to adults, was born in Hereford, TX on October 13, 1928, the daughter of a real life cowboy, Curtis Caraway, and Mary Maude Denny. Her mother died when she was just three, and she was raised by her dear Aunt Bess Jennings, for whom she was named. She was working at the soda fountain in a drug store when a friend introduced her to a young MP from the POW camp outside Hereford. She and Bud Shaw of Rankin, IL were married on August 2, 1944 when she was not quite 16. Just two months later, her husband was shipped off to Germany to fight the next two years in World War II, and Frances boarded a train to Rankin to live and where she and Bud remained until moving to the Kankakee area in 1963 when he became the Plant Maintenance Manager for Kankakee Electric Steel after working on construction of the plant. She was an active member of the American Legion in Rankin and served two years as its president. In Kankakee, she enjoyed getting to know people and worked at various times for Kroehler Furniture; Shopper’s Fair; the cafeteria at Olivet Nazarene College; and, perhaps her favorite job, the Maytag Laundromat in Bourbonnais until retiring in December, 2017 at the age of 89. She delighted in baking pies, cookies and cakes to share. She was also certified in Foot Reflexology and had a number of people she visited regularly to spend some time, share dessert, lessen their aches and pains, and uplift their spirits, all by rubbing their feet. If you ever complained of a cold, headache, or some other ailment she would ask you to remove your shoes and socks so she could do your feet. Even the babies quickly learned to line up for their turn! In these last years, many of these people returned the favor by rubbing hers. Grandma Shaw strived to always see the good in everyone; never gave up hope, even in those who gave up on themselves; selflessly gave of her time, talents and modest income to anyone in need; treated friends and strangers the same, always sharing her warm smile. Visitation will be held Saturday, April 17th from 9:00-11:00 a.m. at the Jensen Funeral Home, followed by a memorial service. Graveside services will be at Rankin Community Cemetery, together with the urns of her husband, daughter and son. We ask that you please follow the state’s guidelines where masks/face coverings and distancing are concerned. On behalf of the family and the funeral home staff, we would like to thank you for your cooperation.

MANTENO -- Known as &#8220;Grandma Shaw&#8221; to countless children and all their friends, some now middle-aged or beyond, Bessie Frances Shaw, age 92, most recently of Heritage Woods Assisted Living of Manteno, passed away peacefully on Friday,... View Obituary & Service Information

The family of Frances Shaw created this Life Tributes page to make it easy to share your memories.

MANTENO -- Known as “Grandma Shaw” to countless children and...

Send flowers to the Shaw family.