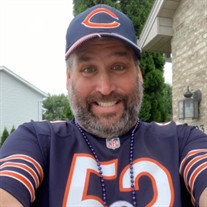 Eric Joseph Nelson, resident of Slidell, Louisiana died at the age of fifty years old on Wednesday, March 18th, 2020. He died from diabetic complications at his father’s home in Bradley, Illinois. Eric Joseph Nelson was born on January 31st, 1970 at Riverside hospital in Kankakee, Illinois. He was born to his parents Rev. Al Nelson and Christean Aslinger Nelson of Dwight, Illinois. He joined his older sister Joan and had many close cousins. He graduated from Momence High School, Momence, Illinois, where he played football and was involved in theater. He was also active in Nazarene church camps and Bible Quizzing competition. He graduated Summa cum laude from Olivet Nazarene University with a degree in Biblical Literature and went on to earn his Masters of Divinity from Nazarene Theological Seminary. Eric married Susan Moore of Country Club Hills, Illinois on May 22,1993 in Bourbonnais, Illinois. He served in pastoral ministry as an ordained elder of the Nazarene church in Minnesota, Illinois, and Louisiana. Eric enjoyed spending time with his family, reading literature and biographies, history, politics, music, cooking, debating, all sports (but especially Chicago sports), technology, and his cats. He is survived by His wife Susan Nelson of Slidell, Louisiana, Nathaniel Nelson of Fort Carson, Colorado, Benjamin Nelson and fiancé Ivanna Adams of Slidell, Louisiana , and Lydia Nelson of Slidell, Louisiana. He also leaves behind his father Al Nelson of Bradley, Illinois and his sister Joan (Daniel) Pontarelli of DeKalb, Illinois. He loved his two nephews Christopher Moore and Joseph Pontarelli, and two nieces Alexandria Pontarelli and Madeleine Moore. Eric was preceded in death by his mother Christean Aslinger Nelson. There will be a private burial at Mound Grove Cemetery in Kankakee, IL Jensen Funeral Home in Bourbonnais, IL is handling the arrangements.

The family of Eric J. Nelson created this Life Tributes page to make it easy to share your memories.

Eric Joseph Nelson, resident of Slidell, Louisiana died at the...

Send flowers to the Nelson family.