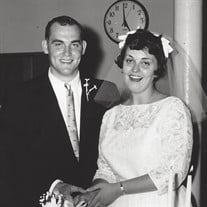 DONALD GLENN PARKHURST, MD Donald Glenn Parkhurst, 81, died Tuesday, August 23, 2016 of a broken heart, literally and figuratively. One cannot think of Donald without his Betty. The Parkhurst Magiera Grant Family welcomes family, friends, peers, employees, associates, and those people whose lives “Big Don” touched personally and professionally to join them in a celebration of his life on Sunday September 4, 2016 at 2 p.m.at the family home with Military Honor Guard ceremony in the back yard at 3:30 p.m. In lieu of flowers, please make a donation in his memory to Riverside Medical Center Good Samaritan Society. Betty and Donald were joint recipients of Riverside’s Good Samaritan Award in 1983. Doc was born February 27, 1935 in Waukegan, Illinois to George Asa Parkhurst and Pearl Briggs Parkhurst. He graduated Joliet Township High School in 1953, graduated University Of Illinois in 1958, received his M.D. from University of Illinois Medical School in 1962, completed his Internship at Illinois Central Hospital Chicago, and completed his Radiology Residency in 1968 at University Of Illinois Hospital Chicago. He married his supervising nurse Betty Ann Lindsay on September 9, 1961. He served as a Captain and Medical Officer in the United States Airforce from 1962 to 1965. Betty and Doc settled in Kankakee in 1968 where they lived and raised their family. Doc served with pride as the Chief of Radiology at Riverside Hospital from 1968 to 2000 ushering Riverside, then a very small community hospital, into the technology age by acquiring new machines known as CAT Scans and MRIs. He also served as consulting Radiologist for Shapiro Developmental Center and the Illinois Veteran’s Hospital from 1970 to 2000 and as a consulting Radiologist at Iroquois Memorial Hospital from 1993-2000. He served as president of the Kankakee County Medical Society and was a Representative to the House of Delegates for Illinois State Medical Society for 20 years. He also served as a Peer Review member for Illinois State Medical Society and was a member of the regional PSRO. He served on Riverside’s tumor board for 32 years. He was a Board Certified Radiologist licensed to practice medicine in Illinois, Wisconsin, Iowa, and Colorado. He was a private man with a big heart, a keen wit, sharp sense of humor, and a love of opera. He was a community philanthropist insisting his many charitable deeds remain anonymous. His pride and joy was his family and he is survived by his daughter Lindsay Ann Parkhurst and her husband Marc Magiera and their daughter Lesley Lucille. His Daughter Lesley Marie Parkhurst Grant and her husband Peter Grant and their children Dillon Briggs, Haley Glenn, and Sadie Elizabeth. His daughter Heather Jean Parkhurst and her son Laiden Glenn. His beloved family friend and caregiver Dorothy Winfield Brooks. He was loved well and will be missed by all those were touched by his benevolent deeds and spirited personality. Sign his guestbook at Jensen Memorial Chapel.com

The family of Donald Glenn Parkhurst, MD created this Life Tributes page to make it easy to share your memories.

Send flowers to the Parkhurst, family.