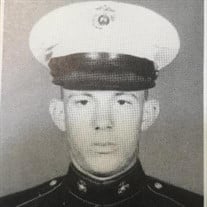 Donald Allen Devereaux Sr. 73, passed away Tuesday, March 30, 2021 at his home in Bradley, IL. He was born August 15, 1947 in Kankakee, IL. The son of Lawrence J. Devereaux and Theresa C. Maillet Devereaux. Don married Patricia F. Reimus on January 29, 1968 in Kankakee, IL. She passed away February 5, 2016 and Don has missed her dearly, ever since. Don worked hard to support his family. He was a retired Postmaster from Herscher, IL. He was a proud man for serving his country. He was a Sergeant, E-5 in the US Marine Corps Reserve during the Vietnam War. Don was a huge and we mean huge Chicago Cub and Bears fan. He also watched Nascar, use to bowl and loved to golf. Just wonder how many times Don, his brother Mike and son Donny went to golf outings over the years. They were great supporters of smaller NFP organizations. Don had the BEST smile. His daughter Tara had spoken to her dad before he passed. She was so grateful that he was so easy to talk to and could talk to him about anything, which she did every night on her way home from work. Oldest daughter Tammy loved how her dad always had her back. There was never a question that he would not be there for her. What wonderful comfort that gave her. The youngest and only son Donald Jr. says he admired and respected the work ethic of his dad. He took great pride in his accomplishments. His dad gave that to him and has made Donny who he is today. He will cherish this gift forever and hopes to continue to make his dad and mom proud of him for the man he is. Don is survived by a son and daughter-in-law; Donald Jr. and Jodi Devereaux of Limestone, a daughter and son-in law; Tammy and Jeff Thier of Mundelein, IL., and a daughter and daughter-in-law; Tara and Kristin Devereaux of Lyman, SC. Surviving siblings are a brother and sister-in-law; Michael and Robin Devereaux of Bourbonnais, IL, Two sisters and brothers-in-law; Debbie and Greg Richey of Bourbonnais, IL, Michelle and Doug Owensby of Kankakee, IL. and a brother-in-law; Wallace "Wally" Gero. Grandchildren: Brooke and Zachary Devereaux, Nolan and Eva Thier and Briggs Devereaux. Great-Grandchildren; Jaylah and Journee Munoz-Macha. Many nieces and nephews. Don loved his family so much. Preceding Don in death are his parents, a sister; Ann Gero, sister and brother-in-law; Joan and Dennis Kerschke, and a brother Dennis Lee Devereaux, a nephew; Jesse Richey and great nephew; Kyle Richey. Visitation will be from 2pm on Monday, April 12 until the 7pm Celebration of Life Service at the new location of Jensen Funeral Home, 3639 E. State Rt 17 in Kankakee, IL 60901. Please make sure you are heading EAST on Rt 17. The funeral home is located on the frontage road on the north side of Rt 17 right after Lowe (Aroma Park Rd) stop light, turn left. The family is asking that everyone please wear a mask and follow all other CDC guidelines while inside the funeral home. No exceptions please. In lieu of flowers memorials may be made to the families wishes. Cremation rights were accorded, and interment will be at Abraham Lincoln National Cemetery in Elwood, IL. Both Don and his wife Patti will be put to rest together.

The family of Donald Allen Devereaux Sr. created this Life Tributes page to make it easy to share your memories.

Send flowers to the Devereaux family.