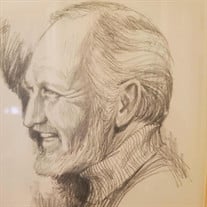 Dana Weaver, loving husband, father, grand father and great grand father passed away peacefully with family by his side Friday April 3, 2020, at Miller Rehabilitation Center in Kankakee. Dana was born the second son of Bryce Paul and Freda (Veach) Weaver on July 29, 1933 in South Bend Indiana. His shenanigans as a kid revealed a lifelong mischevious side and gave a totally new meaning to the term "boys will be boys". Upon completion of high school Dana enlisted in the Air Force and proudly served during the Korean War. He was a born gregarious sales person type and, with his interest in people he never new a stranger. In 1977 he married Gina Regnier of Kankakee and several years later they embarked on a new life in California. Fast-forward to 1996, Dana and Gina moved back to the midwest, settling in Kankakee. In addition to his wife, Dana is survived by a son, Tom, of Michigan City Indiana, a daughter, a very special grand daughter, Amanda, and her beautiful little one, Stevie, along with three other grand children and three great grand daughters. And not to be forgotten, his adored fur baby Ginger. Preceding him in death were his parents and a big brother, Bryce Paul Weaver II. Cremation rites have been accorded and a memorial visitation and mass will be scheduled at a later date. In lieu of flowers memorials may be made to the family's wishes. Dana did not like saying good-bye to anyone, whether it be for a few hours or few days or longer. So he had a years-long-standing substitution. It matched his optimism, good nature and wonderful sense of humor. So to quote the man himself..."See ya later, alligator." Dana never liked saying good-bye, whether for a few hours, even a few days.

The family of Charles "Dana" Weaver created this Life Tributes page to make it easy to share your memories.

Send flowers to the Weaver family.