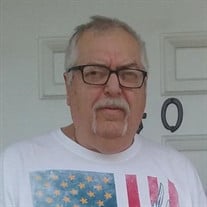 Bryan Marc Lambert, 66 went to be with the Lord on November 20, 2018 at Citadel Care Rehab Center, Kankakee, IL. He was a lifetime resident of Bourbonnais, IL Bryan was born July 11, 1952 at St. Mary’s Hospital in Kankakee, IL. He was the son of Adhemar R. Lambert and Melina P.(Lambert) Lambert. He was married to Joann R. Schultz on August 14, 1982 at Friendswood Christian Church in Bourbonnais, IL, were he became a member. His last job was Front End Maintenance at Jewel Foods in Bourbonnais, IL. He was a proud US Navy Seabee. Bryan was a member of Maternity BVM Church until his marriage. He also was a member of the Jaycees, Vietnam Veterans of America, Disabled American Veterans, and third-degree Knights of Columbus. Bryan played a lot of golf, enjoyed fishing, bowling and music. Surviving are; his wife Joann, daughter; Melina, sister in law; Maureen. He has several nieces, nephews, great and great - great nieces and nephews too. Preceding him in death are his parents, siblings; Robert, Theresa (Dick) Haack, Rodger (Ginger), Ron (Grace) and David. Also, his nephew William Haack. Visitation will be December 8, 2018 from 10-11am at Friendswood Church in Bourbonnais, IL. Memorial Service will follow at 11am. Cremation rites have been accorded. Interment will be in the Spring at Abraham Lincoln National Cemetery in Elwood, IL. In lieu of flowers memorials may be made for the families wishes. Please sign Bryan’s guestbook Jensen Funeral Home is handling the arrangements.

Bryan Marc Lambert, 66 went to be with the Lord on November 20, 2018 at Citadel Care Rehab Center, Kankakee, IL. He was a lifetime resident of Bourbonnais, IL Bryan was born July 11, 1952 at St. Mary&#8217;s Hospital in Kankakee, IL. He was... View Obituary & Service Information

The family of Bryan Marc Lambert created this Life Tributes page to make it easy to share your memories.

Send flowers to the Lambert family.