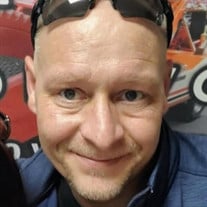 Branden Arthur Hansen, 39, of Saint Anne, IL passed away suddenly, early Tuesday morning April 5th, 2022 at Riverside Medical Center, with his loving wife by his side. Branden was born on July 15th,1982 in Bloomington, IL to Stan and Lyn Hansen. He was born into a loving Catholic family and this love shined through in Branden's daily interactions with every soul he met. Branden was a 2000 graduate from Central High School in Clifton IL. He was born to lend a helping hand and his careers involved serving the communities he lived near and around. Branden began his career in the fire service with Chebanse Township Fire Protection District before eventually joining the Otto Township Fire Protection District. He would later retire from the fire service after many years of service as a Lieutenant with the Aroma Fire Protection District. Branden always expressed love for his “fire family”. He met his future love, Jacqui, while working as an ER Tech at Riverside Medical Center. From there they became inseparable and married on August 8th, 2008 at her parents home in Saint Anne, IL. He spent years working as a Tow Truck Operator for Menz Towing and loved every interaction. He said it wasn’t work when you enjoyed it that much! Most recently Branden was employed by CSL Behring as a Production Operator. He was a hardworking man that put his integrity far above all. Anyone that had the pleasure to meet Branden was guaranteed a laugh. He could make a stranger his best friend and did so anywhere he went. He was a lover of life. He had a passion for tractors and farming from his youth growing up on a farm. He was a team player and spent years racing and working on cars with the Vallejo family racing team. By far Branden’s greatest joy in life was spending time with his son Baine, his wife Jacqui, his nieces and nephews and the rest of his family and friends. He loved kids and enjoyed time coaching youth sports teams and helping to shape our youths' futures. He was a generous man and willing to do anything for his family or friends. Branden was welcomed to Heaven with open arms by his sons, Xander and Evan; maternal grandparents Anita and Bud Raef; paternal grandparents Art and Alice Hansen; brother Brady Allen; as well as his brother-in-law Mike Montelone. He will be remembered and honored everyday by his family. Branden is survived by his loving wife Jacqueline Vallejo Hansen and son Baine Alexander Hansen of Saint Anne; his parents Stan and Lyn Hansen of Bourbonnais; brother Shaun (Eli) Hansen of League City, Texas; sister Stacy Hansen of Naples, Florida; sister Christy (Mike Brown) Spenard of Bourbonnais, in-laws Manuel (Janie) Vallejo of Saint Anne; brother-in-law Izzy (Jen) Vallejo of Bourbonnais; sister-in-law Kim (Patrick) Kleinert of Momence; nephews and nieces Riley and Madigan Spenard of Bourbonnais; Izabel and Mary Alice of League City, Texas; Zoey and Norah Kleinert of Momence; and Emma Vallejo of Bourbonnais. Visitation will be from 3:00 pm to 7:00 pm, Monday, April 11th at Jensen Funeral home with a memorial service to follow. A walk through for firefighters and first responder personnel will begin at 6:00 pm. Branden cared for people based on who they were and not what they looked like or had to offer. In his honor please feel free to dress in casual attire. Memorials may be made to the family's wishes

The family of Branden Arthur Hansen created this Life Tributes page to make it easy to share your memories.

Send flowers to the Hansen family.