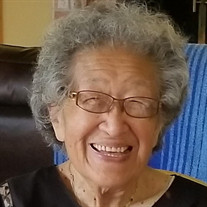 Betty Hiroko Yoshioka, 97, a long time resident of Chicago’s Hyde Park neighborhood, became an official angel, on Thursday, November 21, 2019 in Sugar Grove, IL surrounded by loving family. She was born September 15, 1922 in Tacoma, Washington, a daughter of the late Mitsuo Fukuhara and Sachi Kanetaka. She met her future husband while they were both interned in California and married Masuo Harry Yoshioka, spending many loving years together. She worked as a Gold Stamper and Florist. Betty is survived by two sons, Ronald and Russell Yoshioka; three daughters, Michiye Jane (Jerry) Morishige, Julia Beregsasy, and Jean (Terry) Lindsay; a sister, Yvonne Moriwaki; 10 grandchildren, 15.5 great grandchildren, and one great great grandchild. She is proceeded in death by her loving husband, her parents, four younger sisters, five brother in laws, one daughter-in-law, and one son-in-law. She was a member of the Buddhist Temple of Chicago and was involved in various events there; Natsumatsuri, Asoka Society, Mochi Tsuki. She was passionate about gardening, floral design, crocheting, knitting, origami, reading, and bird watching. Visitation will be Saturday, December 7, 2019 from 1 p.m. until the service at 2 p.m. at the Buddhist Temple of Chicago. Rev. Patty Nakai will officiate. Refreshments will be at 3 p.m. following the service. Cremation rites were accorded.

The family of Betty Hiroko Yoshioka created this Life Tributes page to make it easy to share your memories.

Send flowers to the Yoshioka family.