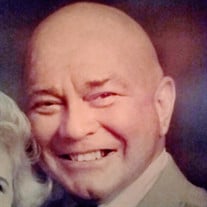 Armond “Joe” LaMontagne, 90, formerly of Bourbonnais, IL passed away February 2, 2020 at the Illinois Veterans Home at Manteno. Joe was born July 25, 1929 in Bourbonnais, the eldest son of Roselee (Lewark) and Henry LaMontagne. He graduated from St. Anne High School in 1946 and enlisted in the U. S. Air Force the same year. He married Rita (Memenga) LaMontagne on July 25, 1979. She preceded him in death on January 17, 2015. Joe proudly served in the U.S. Air Force for 21 years, and became one of the youngest airmen to attain the rank of Chief Master Sergeant, the highest rank for an enlisted man. His specialty was working on jet engines. His active duty was spent in Korea, Germany, Vietnam and numerous air bases throughout the United States. Upon his retirement at age 37, he returned to college and graduated with honors from Southern Illinois University. He returned to his alma mater in St. Anne, where he taught for several years. Joe then embarked on a successful career as a real estate broker in the Kankakee Area. He also taught the real estate licensing class at Kankakee Community for many years. Joe was very active in the Kankakee area community as a member of Kiwanis, The Kankakee County Historical Society, the Kankakee County Board of Realtors, and Toastmasters, and served as President of all four organizations. He participated in the Kankakee River Clean Up for many years, as well as Christmas in April. Joe was an avid reader, and enjoyed boating on the Kankakee River and spending time at his workshop. He was especially interested in the history of Kankakee County, and took great pride in delivering his “Why Do They Call It What They Call it” presentations. After traveling all over the world, Joe was happiest in the area where he grew up. He will be remembered for his strong work ethic, guidance, and great sense of humor. He will be missed. He is survived by his daughter, Cindy LaMontagne of Macon, GA; stepdaughter, JoAn (Ken) Giroux of Bourbonnais, IL; stepson, Jerry (Margaret) Holz of Boise, ID; granddaughters, Jaclyn (Mike) Carrico of Macon, GA; and Sara (John) Wolfsmith of St. Charles, IL; Julia Holz of New Haven, CT; and grandson Lee (Rachel Evans) Giroux of Bend, OR, as well as 3 great-grandsons, Ryan & Andrew Wolfsmith and Walker Evans. Also surviving are bothers, Bernard (Velma) LaMontagne; Donald LaMontagne; sisters, Linda Duby and Sandy LaMontagne, and several nieces and nephews. He was preceded in death by his parents, brother and sister-in-law, Robert and Erleen LaMontagne; sisters, Marie and Shirley, and his former wife, Benita (St. Germaine) LaMontagne. The family wishes to thank the Illinois Veterans Home at Manteno for their dedicated care for Joe and other veterans. A special thanks to Hospice of Kankakee Valley for guiding Joe and his family through his final journey. A very special thank you to Hospice nurse, Traci, and Hospice CNA, Reggie, who went above and beyond in their care. Memorials may be directed to Hospice of Kankakee Valley. Cremation rites have been accorded. Per Joe’s wishes, there will be no visitation. A graveside service will be held Saturday, February 22, 2020 at 11 a.m. at Maternity BVM Cemetery.

The family of Armond "Joe" LaMontagne created this Life Tributes page to make it easy to share your memories.

Send flowers to the LaMontange family.