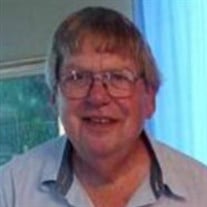 Andrew J. Westerhoff Sr., 73, passed away April 12, 2020 at his home as a result of cancer. He was born February 24, 1947 in Kankakee to the late Marvin and Norma (McInturf) Westerhoff. Andy and Jane (Walters) Westerhoff married May 28, 1966 in Kankakee. Andy was a retired truck driver and a member of Local 705 & 710. He attended Kankakee schools and was a member of KSHS class of 65’ and graduated from Onarga Military School class of 65’. He loved the game of football and thoroughly enjoyed his years of coaching and involvement with the Bourbonnais Bears Junior Football League. He loved spending time with family and friends, traveling, winters in Florida with newfound friends, and being at Woodsmoke Campground, fishing with his grandkids and family. There was special fishing trip taken in July 2019 with his family. He enjoyed going to the casino and lunches with all his retired truck driver friends. He was a fan of whatever a family member was involved in (sports, music, etc.), the Chicago Bears, and the Chicago Cubs. He is survived by his loving wife, Jane; he was a proud father of his sons who also survive; Andrew Jr., Jason (Jenny) and Jacob I (Michelle); his eight grandchildren, Reid, Madeline, Geraldine, Jacob II, Isaac, Joseph, Greison, and Caden; brothers, John and Thomas (Sally); nephews, James (Misty) and their children, Ryan, Madison, and Andrew; Paul, Stephen (Jamie), John (Mitzi), Dennis and Richard Westerhoff; nieces, Lisa (Brent) Stanbury and children, Eric and Evan; Nicole (Al) Sanders, and Tami (Jeff) KimKade; sisters-in-law, Karen Hoffman, Kathy (Tim) Bowling; brothers-in-law, David (Tami) Walters and Dennis (Frances) Walters; many loving nieces and nephews, dear friends, neighbors, cousins; and four step grandchildren, Noah, Emily, Abby, and Eli. Preceding Andy in death are his parents, a brother, James; a nephew, Ty; in-laws, Dave Jr. and Verna Walters, Beatriceand Donald LaCost; and sisters-in-law, Joan Westerhoff and Judy Darche. A celebration of Andy’s life will be held at a later date. He enjoyed life and will be missed.

Andrew J. Westerhoff Sr., 73, passed away April 12, 2020 at his home as a result of cancer. He was born February 24, 1947 in Kankakee to the late Marvin and Norma (McInturf) Westerhoff. Andy and Jane (Walters) Westerhoff married May 28,... View Obituary & Service Information

The family of Andrew J. "Andy" Westerhoff Sr. created this Life Tributes page to make it easy to share your memories.

Send flowers to the Westerhoff family.