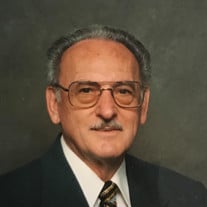 Alfred J Savoie, 89, of Kankakee, passed away Thursday (June 1, 2017) at Presence Heritage Village in Kankakee. He was born Oct. 21, 1927, in Lonoke, Ark., the son of Fred and Zella Butler Savoie. Alfred married Irene Boudreau on July 29, 1950, in Kankakee. Alfred retired after 40 years from Armstrong World Industries. He was past mayor of the town of Lincoln, Wis., near Crandon, Wis. He served our country with the U.S. Army during World War II. He attended St. Joseph Catholic Church in Bradley. Alfred was the district governor of 27-B2 for Lions Club International, Bradley Lions Club, American Legion, Loyal Order of the Moose and Knights of Columbus 4th Degree. Surviving are his wife, of Kankakee; sons, Steven and Holly Savoie, of Havelock, N.C., David Savoie and Jeanne, of Bourbonnais; daughters, Marilyn and Marc Spenard, of Kankakee, Christine Moss and John Reddington, of Kankakee; 11 grandchildren; and 17 great-grandchildren. Preceding him in death were his parents; sister, Joan Miller; and brother, Marcell Savoie. Visitation will be from 10 a.m. Friday until the 11 a.m. service at St. Joseph Catholic Church in Bradley, with the Rev. Anthony Nugent officiating. Cremation rites have been accorded. Memorials may be made to the Alzheimers Association. Please sign his online guestbook at jensenmemorialchapel.com.

The family of Alfred J Savoie created this Life Tributes page to make it easy to share your memories.

Send flowers to the Savoie family.